9: The Hermit, permissions to grow 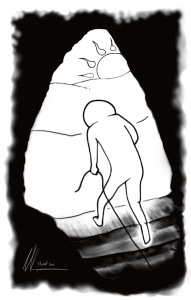 The Hermit is the mind in retreat while being receptive to influences from friends, society, and experience; they may not react to these influences externally, but it’s hitting the Hermit fully – as if they were an exposed nerve.  The Hermit is going through a phase of introspection, extrapolation, and deliberation to test the self’s worth for the life that is being lived.

The symbol of Virgo is attributed to this card. Virgo is the urge to express the ability to create.  The Hermit is a lonely character, but they can cause massive positive changes to society by understanding themselves as a crucial part of the universe.  This is a card of insight and reflection because we will never understand certain things until we have lived through them, and then considered how the experience relates to our own life.

There is an internal need here — a want, vision, or dream will take us on a fantastic journey that is nearly going to kill us (dreams can be lofty ideas that involve risks). We will be stripped of love, dignity, foresight, and any other positive attributes we have started to apply.  The Hermit is the initiator for the journey into the underworld, the dark night of the soul, but that’s what we wanted from this path. We seek to see the whole range of humanity, from the lows that disgust us to the highs that elate us in spiritual ways. We will survive, and we will have seen the heights of heaven and the depths of hell.

This is the challenge that faces the Hermit; he has to expose the tender nature that lies within humanity. This nature has to be chosen, it is not genetic.  The Hermit knows that he is an unclean wretch, and as human as they come.  How on earth will the Hermit become a channel for the divine?

The Hermit takes on the persona of all the tarot cards, and will study them in relation to his own experiences.  The Hermit leaves his cave from one underworld straight into another.  We should be well aware at this point that this journey could be lethal, but with each journey we are being shown a constructive set of unique viewpoints that once assimilated into the psyche will benefit us and others.

Jupiter’s sphere (Chesed) supplies inspiration and the ability to expand into new experiences, and the Sun’s sphere (Tipareth) turns the Hermit into a central figure to inspire others. This is because the Hermit is able to understand the processes that happen inside a person, and highlight better paths that may lead to success because they have walked them.  This part of our psyche becomes our learned ‘pilot’ through life, and helps us to integrate with society through a mutual understanding of human suffering.

The Hermit will see masses of insightful notions within reality as the brain is working overtime to get as much information as possible from every single moment it is awake. This is not neurosis, this is metamorphosis.  The Hermit wants to be wise, so they will unconsciously act out the deeds and actions that will propel them forward into habitual positive behaviours. ‘Unconscious’ is the key here because ‘consciousness’ is a teaspoon full of life compared to the ocean of the mind, and its collection of memories and experiences.

A study of psychology or sociology would arm the Hermit with some defences, and even a simple understanding of people’s body language would help the Hermit understand more of the world around them.

The Hermit follows mystery and intrigue with a willingness to experiment to uncover hidden or latent skills. This detective nature is unquestioning as it knows that it is in virgin territory, but the past experiences that have created the Hermit may distort the truth.  The Hermit is having to use instincts to find a way out of the approaching obstacles and troubles; these instincts include the ability to guess what will happen using an extrapolation of present events which are not always accurate in predicting future events.  This is a very ‘holy’ card, and can inspire us into different religions, or at least a study them.

Introspection is a natural state of mind for the Hermit.  They are digging for parts of the self to express a higher nature, and this process can take years, or decades.  The person is having to reinvent their personality from the ground up by firstly collecting insights through reflection. The Hermit is scraping reality for ways to understand their own life for a better way to evolve, firstly to save themselves, and then to help others. What use is a cure if it doesn’t work?

The Hebrew letter for this path is ‘Yod’, meaning ‘hand’.  This simple letter is the crowning light of all the Hebrew letters (all the letters are made from this initiatory shape).  It is the spiritual seed within, our spark of life, and the unquenchable spirit of humanity.  We can visualise our soul or spirit as coming from an indistinguishable point within and the Yod as the flame that emerges from that.  That simple acknowledgement within will give you a guiding light through the darkest of times.  This is the Hermit’s guiding light.

This card is a bit of a long burner because of the amount of introspection involved.  The Hermit is very thorough with its analytical process, but  there’s also a sense of urgency with it. For the Hermit to find the answer he must escape his own terrors and face his own shadows.  It’s a very dark card full of self-revelations, and the only thing you could do to speed up this process is accept self-love, but that is hardly likely as the Hermit is hunting his shadow nature and exposing it to himself honestly.  The card takes a long time to come full circle, and the need to be gentle on the self cannot be expressed strongly enough.  The shadowy material the Hermit encounters on his journey is inspirational, but also cuts to the core of what makes us human.