4: The Emperor, Lifted spirits of fire 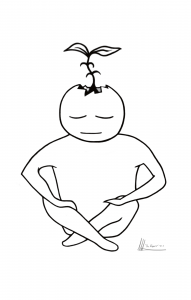 To summon the powers that lie dormant would be a good way to describe our innate wish to have our own power, and to make a difference in the world.  The end result of inspiration, a will to help others, and blind faith in yourself will lead you to the Emperor, and the power to have confidence in your actions.  If you wish to move mountains, you have to get permission from yourself in some way. The human state is to naturally become static and safe in habits.

The dreamer and visionary who wishes to become more than human must make some sacrifices to be able to step forward into this confidence.  This card really can sum up the majesty of emotional feelings and turns them into actions that bring great strength to the personality.

The Emperor is a highly dynamic force in nature.  We are consumed by a spiritual fire to move forward in life, and to pass that fire onto others.  We have been previously powerless, and now have transformed into a spiritual battery.  Not everyone can sit on a throne, and to be in a position of important influence we’ll need to be transformed by that spiritual fire which comes from observation, and determination.

We can’t reflect the light above without being cleansed.  The Thoth Tarot deck shows the card with a lamb sitting at the ruler’s feet.  This lamb is the nature that preceded the ruler; soft, innocent, and slaughtered for a greater cause.  An analogy would be that of dropping a habit to benefit someone else close to you — we transform our self into a better form for the sake of others.

This is a card of spiritual power, projection, and awareness of the need to bring the spiritual nature into reality for the sake of the all.  We see many cards that influence this persona including the Hierophant and the Hermit (and others) — looking at these relations between spheres and paths is a lifelong study, and an interesting form of mental ‘alchemy’ which we’ll return to in future books.

The dreams of the seeker get embedded into the psyche when the Emperor awakens. The seeker has decided to speak out, or act.  The Emperor decides that there must be some common links between all of us, and makes a concerted effort to bring a higher nature to reality.

Aries gives the power for forward movement (regardless of hesitation) — it denotes a very brave mind, and the ability to actualize dreams and visions.  You could also label this ‘single-minded perseverance’.

All this activity brings a lot of experiences to the path, and we can become isolated as we push through many new experiences that no one (in our eyes) has ever known, due to our manifestation of things we perceive as being needed in the sphere of our experience.

The Hebrew letter attributed here originally is Heh (Window) and we’ll go with that and leave the changes made by others down to your own meditations.  Imagine being in the house created by the Magician and you’ve found a set of rules that have balanced the Fool out;  The Emperor looks out of the window and sees that the spiritual lives of those around him are in darker places, and he seeks to bring that spiritual fire out into their lives.  There is a lot of observation going on and this card is a symbol of wisdom and willpower applied.  So the Emperor sits on his throne studying the difference between the divine and reality in accordance with the balanced life found via the Magician, while the Empress lets influences in and out of the psyche to keep the Emperor benevolent and the Fool happy that the divine spark is being acknowledged. It’s a really neat triad that tempers the divine inspiration.